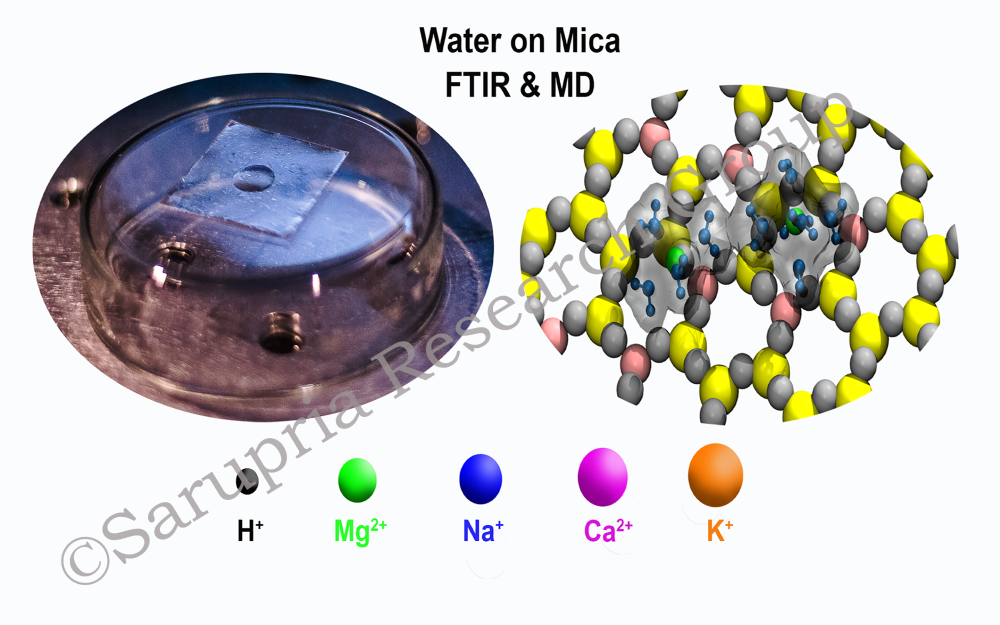 Heterogeneous ice nucleation is the nucleation process facilitated by the substrates, i.e. pollens, aerosol particles, and ice binding proteins. In the past few decades, researchers are working to answer the question of what makes a substrate a good/bad nucleating agent. In addition, how the corresponding nucleation mechanism changes from case to case also remains unsolved. Our group has investigated the ice nucleating behavior on several mineral surfaces with modified surface properties. We have identified the correlation between the metastable water structure and the surface nucleating propensity. We are working on studying the ice nucleation on mica surfaces with modified surface cations by combining the experimental techniques with computational methods. Our ultimate goal is to be able to engineer the surface with desired nucleating properties.

Check out our talk describing our latest work.

Our group develops methods and software in order to efficiently sample rare events in molecular simulations. Molecular processes such as nucleation from a metastable phase and protein folding involve waiting times many orders of magnitude longer than the actual transition to occur once it has begun. We develop and apply forward flux sampling-based methods that sample along multiple order parameters simultaneously as well as software—SAFFIRE—to enable their use in highly parallel computing environments. 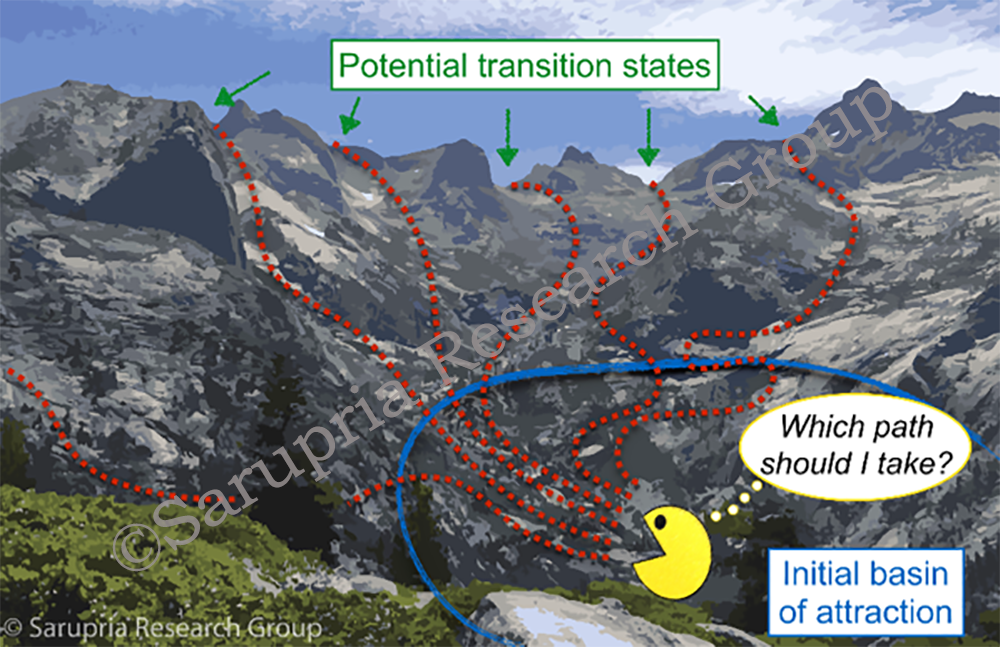 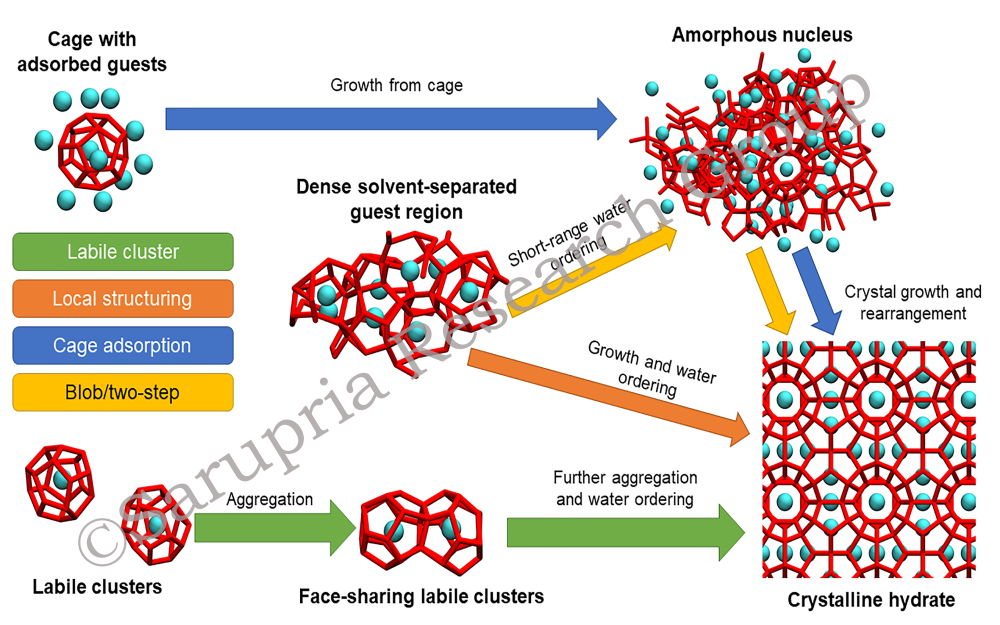 Aqueous mixtures of molecules like methane, carbon dioxide and ethane form beautiful crystalline structures called gas hydrates when pressurized and cooled. Naturally occurring methane gas hydrates are expected to be a promising source of energy. Further novel technologies to purify water, store energy, sequester carbon dioxide and separate gases have been based on gas hydrates. However, many molecular details on the formation of gas hydrates remain unknown. We use molecular simulations combined with rare event methods to answer these questions—what are the structural and dynamical pathways of hydrate nucleation, how is this transition affected by the presence of surfaces and how do additives affect such transitions?

The availability of potable water is one of the major challenges facing the world today. Desalination of sea water is a viable alternative to help compensate for ever shrinking fresh water resources. However, desalination is an energy intensive process and filtration membranes lose performance over time due to fouling. The propensity of a membrane to foul is associated with its surface chemistry, roughness and hydrodynamics. The application of surface coatings coupled with the sub-micron patterning of the membrane surface has been shown to reduce the membrane fouling experimentally. However, the lack of understanding of underlying mechanism impedes the swift improvement in design of membrane materials. Our group utilizes molecular dynamics(MD) simulations to study fouling phenomenon.
While surface chemistry can be studied using the MD simulations, the length and timescale limitations with this technique does not allow the hydrodynamic study. In collaboration with the groups of Dr. David Ladner and Dr. Illenia Battiato, we are attempting a multiscale framework which can account for both the hydrodynamics and chemistry effects. 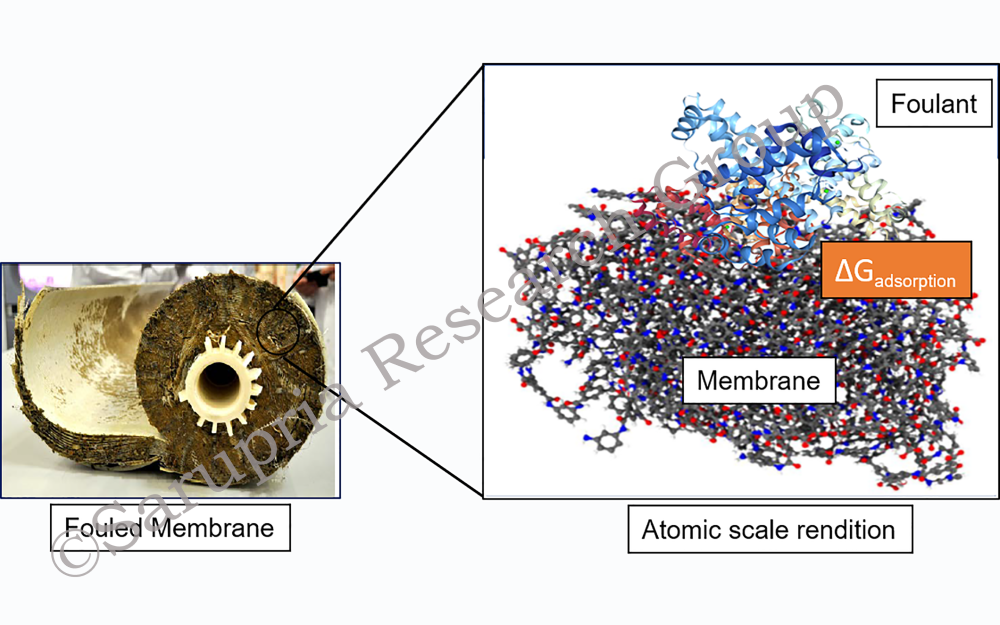 Enzymes are the proteins that catalyze reactions. The powerful quality of enzymes is their specificity. This has made them an attractive catalyst to use for biotechnological applications. However, enzymes can work only in certain conditions and often these conditions are different from those in the industrial applications. Thus, there is a need to engineer enzymes and enzyme environments such that the enzymes are functional in the desired operating conditions. To enable such technologies, we use molecular simulations to understand the structure-function-dynamics relation in enzymes. We study the effect of mutations as well as immobilization of enzymes on this relationship.